On Saturday, Jan. 25, 2014, in the small village of Ruacana on the border between Namibia and Angola, nearly 20 years of work came to fruition. LBT, with partners at the Bible Society of Namibia and the Lutheran Church, dedicated Etestamende Epe, the New Testament in the Dhimba language.

The Dhimba people, essentially unreached before the 1960s, now have the Word of God in their own language as a foundation upon which to build sustainable Christian thought and life in their culture.

“Receive the master key that unlocks the door to eternal life – this book is that key!” proclaimed Namibian Bishop Dr. Dumeni, a longtime supporter of the project.

People had been looking forward to this day for some time. Early in the program, Rev. Johannes Tolu, the Dhimba Bible translator, asked people to refrain from trying to buy Bibles until the dedication was complete. But it was to no avail; the line continued to grow. People wanted to put their hands on the long-awaited book.

LBT missionary John Strasen, who worked with the translation team to bring the manuscript to completion, and former missionary Judy Olson, who served as literacy advisor, attended. They were joined by Rev. Rich Rudowske, LBT’s Regional Director for Southern Africa, and David and Ruth Snyder, then-Interim Executive Director at LBT.

The Dream: The Evangelical Lutheran Church and Rev. Tolu

Several LBT missionaries have served in Namibia over the years. LBT aided survey work, literacy, Scripture Engagement and translation efforts. But the desire and determination to have God’s Word in the Dhimba language originated with the Evangelical Lutheran Church in Namibia (ELCIN) and Rev. Johannes Tolu, head translator for Dhimba Bible Translation and Literacy Project since 1998.

ELCIN has its roots in the Finnish Evangelical Lutheran Mission, a group of Finnish missionaries who came to northern Namibia in 1870 to plant the seeds of Christianity. Today, the church has almost 700,000 members. Its mission is to proclaim the Gospel of Christ to every person.

Rev. Tolu was ordained as an ELCIN pastor in 1982. He was first called to serve as a missionary in a congregation in Ruacana. In 1986 he began similar outreach work in Opuwo, serving as parish pastor and also missionary-at-large to surrounding, un-evangelized areas. While in Ruacana he worked on the Dhimba translation of St. John’s Gospel.

Slowed by the Namibian Struggle for Independence

Namibia’s struggle for independence from the apartheid government of South Africa put the Dhimba translation on hold until 1994, when ELCIN encouraged continuing the work. With the help of LBT and Finnish missionary friends, Rev. Tolu returned to part-time translation work in 1995.

Picking Up the Pace

In 1998 Rev. Tolu attended a one-year course at the Bible Institute of South Africa in Cape Town. The course trained mother-tongue translators in biblical languages, translation practice and linguistics. Rev. Tolu was able to attend due to a generous scholarship through LBT from the International Lutheran Women’s Missionary League. He then began work full time as head translator and driving force for the project.

The new Dhimba New Testament is the very first complete book of Scripture for the Dhimba nation, which numbers over 30,000. The majority (about 65 percent) of Dhimba people live in southern Angola.

Where are the Dhimba Bibles?

The work was based in Namibia for practical reasons. However, it was the Dhimba speakers in Angola who have eagerly been asking Rev. Tolu for years, ”Where are the Dhimba Bibles? You say they will soon be done, but we do not see them. Are you sure you have done this work? We need to have the Bible in our language.”

With thanks to God, Pastor Tolu can now say, YES, the New Testament is now available. By God’s grace, and LBT’s faithful supporters, LBT will be joining the Scripture promotion and Christian education efforts of the national Lutheran churches in Namibia and Angola. 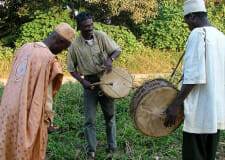 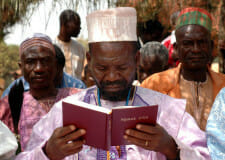