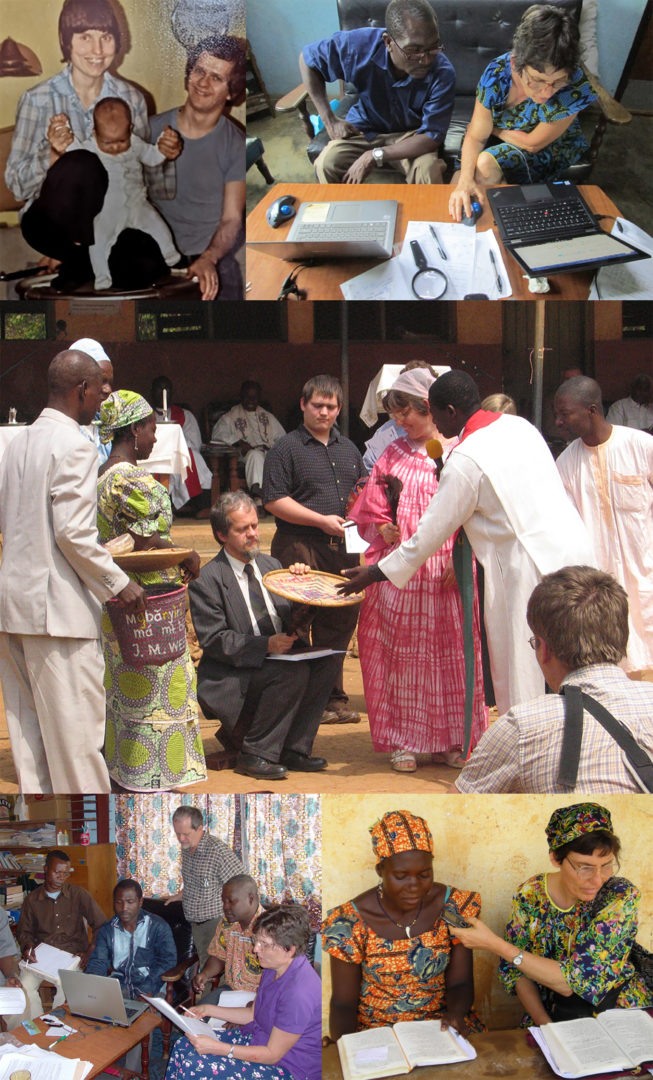 The Webers began serving in Cameroon in 1982. The Kwanja New Testament was dedicated in 2006. Since then, they mentored several language groups.

A 2011 letter contained the following synopsis.

In 1982, a young couple traveled to Cameroon to serve among the Kwanja people. During the next 23 years, working with dedicated Kwanja co-workers, they helped translate the New Testament into the Kwanja language, helped launch a major literacy effort, and raised their three children. Since the dedication of the New Testament in 2006, Martin and Joan Weber have continued to serve among the Kwanja, encouraging them to read and study God’s Word. They’re also working to find ways to reach those who cannot read through recorded Scripture and other types of media.

In the ten years since that letter was published, the Webers have worked with the Evangelical Lutheran Church in Cameroon (EELC), enabling, equipping, encouraging and empowering Cameroonian co-workers in several language groups to bring Scripture to people in the language they understand. The result: audio Scripture recordings, additional New Testament translation work, Old Testament translation in Kwanja, the publication of several lectionaries, worship songs, Bible apps, literacy programs, and the dedication of a Bible House that will further advance God’s work in Cameroon.

This month, the Webers are retiring from Lutheran Bible Translators. They leave a legacy that will serve as an example and inspiration to the people they served as well as future missionaries.

Many years ago, Martin and Joan entitled their prayer letter In Their Hands and Upon Their Hearts. They knew that having a book in hand was just the beginning. Their goal has always been for people to use, share, and live by God’s Word. It was a tall order. For generations, the Kwanja people suffered oppression and discrimination at the hands of a more dominant tribe. According to Kwanja minister Pastor Samuel Nyigandji, “There was a stigma attached to being a Kwanja. We had been humiliated and continued to be humiliated. Young people wondered what good was it to identify as Kwanja. Many no longer spoke the Kwanja language.”

When the translation project began, Kwanja chiefs felt encouraged to promote language usage. A sense of pride was reborn. “There was a recognition of our identity, a recognition of our existence as a people.” With the publication of the New Testament and subsequent language projects, all Kwanja have the opportunity to read and hear God’s Word.

The Webers may have left Cameroon, but the work they began endures. “In the past we thought of ourselves as slaves. Now we think of ourselves as free,” said Pastor Nyigandji. “We will do everything to free ourselves from the powers that would keep us as slaves, and from the power of the devil. We pray this relationship which God has established between us can continue so that we can continue to cooperate as children of God, as people freed by God Himself.” God’s Word is indeed upon the hearts of the Kwanja people.

There are a number of ways you can help with the continuing work in Cameroon. You may choose to support Elliot and Serena Derricks who are serving with the SubulaTranslation and Literacy Project, or make a gift through LBT to the Department of Bible Translation (DTA) in the Evangelical Lutheran Church in Cameroon (EELC).

Please join with the staff and missionaries of LBT as well as the people of Cameroon in thanking Martin and Joan for their many years of service. And please pray as they have requested: “that His Spirit lead us to continue to make disciples of Jesus and to passionately share His Word, love and truth wherever we are, and that God will continue to lead us as we adjust to many changes, just as He has all these years.”