Return of the Lost Book? 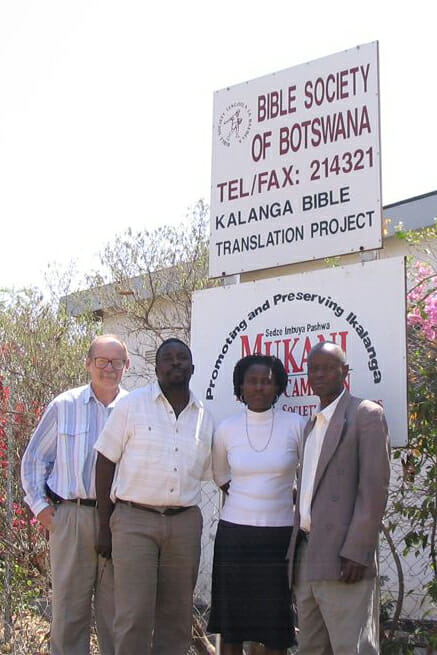 For the first time, the Kalanga people of Botswana have the full Bible in their language. Has their lost book returned?

Lutheran Bible Translators has partnered with mother tongue speakers of Kalanga for many years. Former missionaries Carl and Melody Knight helped promote literacy. Most recently, Rev. Michael Megahan worked with the translation team to revise their New Testament and translate the Old Testament. Dr. Mike Rodewald, now executive director of Lutheran Bible Translators, and his wife, Cindy, worked with the Mukani Writer’s Association, an organization that produced literature and literacy materials in the Kalanga language.

Because Mike and his family lived among the Kalanga, he is well versed in their history and tradition. “The Kalanga historically worshiped a spiritual power named Mwali, who shared characteristics with the Jewish God Yahweh. Scholars have debated how the Kalanga came to know this spiritual power, a supreme being whose special relationship with them was preserved through laws and structure very much like those we find described in the Old Testament,” Mike says.

There are different schools of thought regarding this and no clear-cut answers. But Mike discovered one truly intriguing thing—a possible connection between the Kalanga and the Jewish people of ancient Israel.

“Oral tradition says that a high priest named Buba led a group of Israelites from Judea 2,500 years ago. They settled as traders in Yemen,” explains Mike. “They crossed over into Ethiopia and Tanzania and eventually moved south through Africa. Settling in Zimbabwe, they became known as the Lemba people. Their language was Kalanga.”

The Lemba interacted with neighboring peoples, introducing them to Mwali and influencing their language and religious practices. Though the Lemba people of today no longer speak Kalanga, a report from the British War Office from 1905 notes that the Lemba still spoke Kalanga at that time.

A book made of skin

As fantastic as this may seem, genetic evidence may corroborate the Jewish ancestry of the Lemba people. And these Lemba people also claim that they had a book, a Bible made of skin that was somehow lost.The priests would stand on the hills and read from this scroll to the people gathered to listen. Could this have been a Torah or collection of other Jewish scripture? Mike points out, “Possession of such a ‘book’ would explain the similarities between Yahweh and Mwali, and why today’s Lemba—and present-day speakers of Kalanga—continue to maintain practices similar to those in Hebrew traditions.”

Many questions remain regarding Mwali and the lost book. But how wonderful to imagine that the Kalanga will soon receive their own “Bible made of skin” in the form of the complete Scriptures, the New Testament as well as the Old, replete with the history of the Jewish people and the promise of a Messiah to come.

The dedication of the Kalanga Bible is scheduled for August 25 in Francistown, Botswana. To read more stories like this sign up for Lutheran Bible Translators’ quarterly newsletter, The Messenger.