You may not think of the Reformation as a grassroots movement, but you could say that’s how it started out. One man listed the issues he had with the church, others copied and distributed the list, the copies spread from region to region, and soon people all over Europe were aware of Luther’s grievances. And many agreed with him. The time was right for major change.

The Reformation inevitably became enmeshed in politics, with princes and kings determining the official religious affiliation of their kingdoms. But that didn’t stop individuals from following their own hearts and minds. As literacy grew in Europe (promoted by Luther and others) and more Bible translations became available, people could read and study Scripture themselves.

Having access to the Bible in a language you understand remains key to people coming to faith. No one knows that better than Rev. John Bundor. 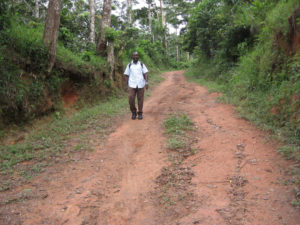 Rev. Bundor has a love for the Bible, his language, and his people. Today he serves as president of Christ Evangelical Lutheran Church in Sierra Leone and as literacy coordinator with the Kissi Literacy Project. There are approximately 178,000 Kissi speakers in eastern Sierra Leone. They received their New Testament in 1990 and the full Bible in 2014.

Rev. Bundor’s promotion of Kissi literacy is not new. He has helped organize congregations, helped train people to read, and encouraged the use of the Kissi Bible for worship since 2012. In some cases, he literally walked into the forest to reach remote locations. “God’s Word is not only for the rich or educated, or for people who live in large cities,” he said. “Those in rural communities also need access to Scripture in a language they understand.”

In many cases, Kissi is the only language used in these communities. To hear God’s Word in their language leads to greater acceptance and understanding of Scripture. But Rev. Bundor believes people should also be able to read Scripture. “It’s easy to forget something if we have only heard it, it doesn’t always stick in the mind,” he explained. “If you can read Scripture, then you don’t depend on listening to someone else, you can be in constant communication with God.”

It takes time and patience to organize a literacy class. The age range of the students, from young children to the elderly, can be challenging. Not every student is Christian. But each class begins with devotions and Scripture readings. Because of this exposure to God’s Word, some have come to faith. And Rev. Bundor reports that 25 graduates of the literacy program have gone on to serve as literacy teachers themselves or as lay workers in the church.

The Gospel is spreading among the Kissi as the community embraces the message found in Scripture. Click here to learn more and find out how you can help. And be sure to listen to LBT’s podcast episode Literacy in Sierra Leone, featuring Rev. Bundor.

Spiritual reformation is most certainly still happening! Thank you for participating in the Bible translation movement through Lutheran Bible Translators.