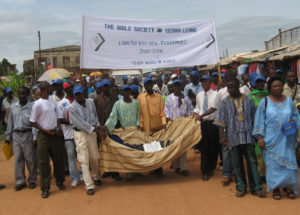 One night several years ago, when we were living in the village of Koaka in the Kono area of Sierra Leone, our neighbor’s house was struck by lightning. As the flames burned the grass roof and climbed higher into the sky, I joined the crowd that was gathering to watch. When the people began to comment among themselves about the fire, I was struck by the difference in outlook between my culture and theirs.

If the same situation happened in America, the people who gathered would be commenting on what a shame it was that the family lost their home, what a tragedy. But that night in Kono, people were saying, “I wonder what they did? I wonder what they did to anger the spirits to cause their home to be struck by lightning?”

So many people in Kono live in fear of the spirits who they believe control their lives. They are always concerned about whether or not they have made the right sacrifices or done the right things to protect themselves and their families….

Jim and Susan Kaiser related this story in 1996 while they were serving with the Kono New Testament translation team. Twelve years later the completed New Testament was presented to the Kono people. It was the culmination of over twenty years of dedicated service and partnership between missionaries, translation team staff, the Kono community, and prayer and financial supporters here in the U.S. Having Scripture in their hands was cause for much rejoicing among the Kono. At last there was an opportunity to learn about the one true faithful and loving God!

But the story doesn’t end there.

Translating God’s Word is just the beginning of the process. If people don’t engage with Scripture—read it, listen to it, share in the church and at home—it is meaningless. Today, the Kono Literacy and Scripture Engagement Program continues to promote God’s Word through literacy, translation and training.

The Kono have come a long way, but there is much work still to be done. Click here to read more about the Kono and the New Testament dedication in 2008. To learn how you can help the Kono community continue its walk of faith today click here.