Audio Scripture Comes to the Vai

About a year and half ago I learned that you could put the entire Bible on an SD card.  Since we have eleven New Testaments in Liberian languages recorded, I downloaded the Lorma New Testament. After I successfully loaded it on an SD card, I played it for a Lorma friend who had come to visit me. The way his eyes lit up convinced me of the impact that audio Scripture recordings make. LBT’s involvement in audio Scripture engagement is changing lives, especially in Liberia. 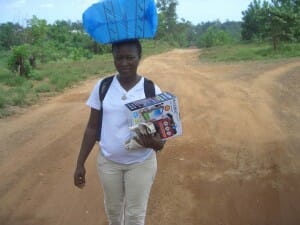 When I learned that Aminata Mosaquoi had become a Christian I purchased a radio for her, as well as a Vai SD New Testament. As she heard the New Testament being read, her eyes were even brighter than the Lorma man’s eyes. She pulled her Vai New Testament out of her purse, and tears of joy flowed down her face as she heard God speaking in her language. Many times I heard her say, “It is so much better to hear it than even reading it,” as she intently listened to Matthew 1 being read in her mother tongue. 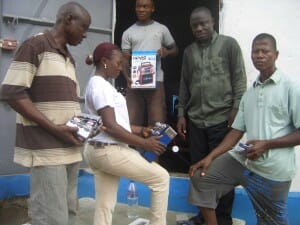 The Vai language supervisor, George Kiatamba, has had a burden to reach his people with God’s Word, since the majority of Vai speakers are Muslim. Now, Aminata, as a new Christian, joins him with great enthusiasm. From May 19 to May 24, they traveled to Vai-speaking villages and distributed radios, batteries, and the SD cards to church congregations. Both Christians and Muslims became very excited to hear Scripture recordings in their heart language. Many of them asked how they could purchase their own. Praise be to God for the success of this trip! May He continue working in the hearts of people in Liberia as they hear and truly understand His Word in Scripture.

Please keep Alvina and LBT’s international partners in your prayers as they distribute these important tools so that all might hear the Good News.