They Came to Serve

When civil war raged in Liberia from 1989-2003, its peoples searched for sanctuary. Some came to the United States. They gradually integrated into U.S. society but they also kept speaking their mother tongues – the language in which they could best understand and express themselves in joy, happiness, sadness and relationship. Many who fled Liberia spoke Kisi (also spelled Kissi in some reference materials), a language spoken by almost a half million people in Liberia, Sierra Leone and Guinea and into which LBT missionaries had been translating God’s Word even before the war.

Despite the many challenges and setbacks faced through civil unrest and uncertainty, translation and literacy efforts continued. In 2014, the completed Kisi Bible was printed and shipped to Liberia. It was dedicated that November amid yet another crisis (Ebola) but that did not stop it from being distributed. It is now widely used where it has become available.

Those in the Kisi community who came to the U.S. became citizens, but they still honor their heritage and maintain close ties with family and friends here and abroad. When they learned that the Bible had been dedicated they knew they, too, had to celebrate.

On July 19, Kisi speakers from all over the U.S. gathered in Brooklyn Park, Minnesota. They gave thanks to God that His Word is now available in their language and prayed and sang in both English and their mother tongue.  They also offered thanks to special guests, LBT missionaries Rev. Larry and Mae Johnson and Norm and Shirley Jaschen, who attended along with their families, including children and grandchildren.

Joseph Bimba, whose father, Rev. Fallah Bimba, was highly active in translation efforts within Liberia, acknowledged that living in the U.S. made him really understand what LBT missionaries had to give up to live and serve in Liberia those many years ago, “These missionaries came voluntarily to serve among the Kisi, giving up the comforts and advantages of living in the U.S. to live in a culture and environment so different from their own.  They made sacrifices to bring God’s Word to the Kisi people, enduring mosquitoes, malaria, no electricity or plumbing, bad roads, and more.” 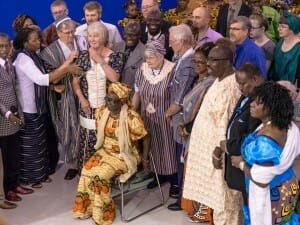 Larry and Mae Johnson were first sent by Lutheran Bible Translators in 1973 to establish linguistic work among the Kisi and form and train the Kisi translation team for the New Testament translation project.  Norm and Shirley Jaschen followed a year later to develop literacy materials and a literacy program in the Kisi language. Rev. Johnson also served as the Bible translation consultant for the Old Testament through the United Bible Societies, traveling to and from Liberia from 1994-2012.

As a sign of appreciation, honor and respect, the Kisi community ceremoniously presented hand-woven country-cloth robes and ‘gowned’ Larry and Mae and Norm and Shirley for their service to the Kisi people. Forty new Kisi Bibles brought from Liberia were purchased within minutes.

Lutheran Bible Translators gives thanks for the service of the Johnsons and the Jaschens as well as the many in the U.S. who prayed for and supported this ministry financially over the years. LBT and its missionaries serve so that such as the Kisi are reached with God’s Word through their own language. LBT also gives thanks for the Kisi community in the U.S. and those in Liberia who faithfully participated towards the day when the whole Bible would be completed and in their hands. God’s Word is for every language.