The Word Made Flesh

As far back as 1223, the emphasis at Christmas was on partying and exchanging gifts. St. Francis of Assisi recognized that the focus needed to be redirected to the Christ Child, a 13th century effort to show people that “Jesus is the reason for the season.” Francis believed that because the Mass was celebrated in Latin—a language the majority of the population neither spoke nor understood—people had a hard time picturing the Savior’s birth. He needed a visual aid that all could comprehend.

So, he invented the Nativity scene. 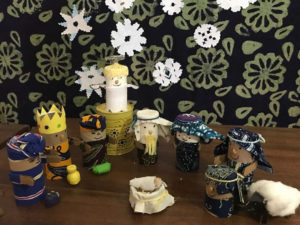 Over the centuries, the Nativity scene has ranged from professionally elaborate to simple and homemade.

With a human holy family and a few animals, that first Nativity scene was immensely popular in the community and widely replicated in ensuing years. Within a century, every church in Italy displayed their own Nativity scene, gradually replacing the human actors with figurines and statues. By the 19th century, the Nativity scene had become a staple not only for churches, but for Christmas displays outside homes all across the world.

In our own time, the Nativity scene has become controversial. Should it be displayed in public venues? Has it simply become a meaningless tradition to be placed next to the inflated Santa and plastic snowman? What do we really see when we look at the Christ Child?

Rev. Claude and Rhoda Houge served in Africa for 23 years. What they witnessed at a living Nativity scene in a village in northern Ghana became one of their most memorable experiences.

“The Nativity scene was complete with Mary and Joseph and a few animals. But the manger was empty,” Rhoda remembers. “I couldn’t imagine who, or what, was going to fill the role of baby Jesus. There were no babies that I could see and dolls were rare.”

Much to Rhoda’s surprise, the girl playing Mary reached behind her back and pulled out a Bible. She placed the book in the manger.

“It was moving to see how much value was placed on Scripture, that this book would be used to represent Jesus. And how insightful! Jesus is the Word. What could be more appropriate than using a Bible to represent the Savior of the world.”

Sometimes the ways of the world, the pressures of life, disagreements and controversy get in the way of the pure simple truth recognized by this young Ghanaian girl. When we look at the Christ Child, He’s more than an innocent baby, more than part of a touching family tableau, more than a newborn come into the world on a silent night. He is the Word, God made manifest—Wonderful, Counselor, Mighty God, Everlasting Father, Prince of Peace. The true “reason for the season.”

Thank you for partnering with Lutheran Bible Translators to bring Scripture to people in a language they can understand. God’s blessings to you as we celebrate the Nativity with Christians around the world.