When I was a young child, we used the King James Bible at home and at church. I naively assumed that was how Jesus talked and sounded. You know, Early Modern English with lots of “thee” and “thou”. Nothing like the words and language construction of the Aramaic and Hebrew He would have used. 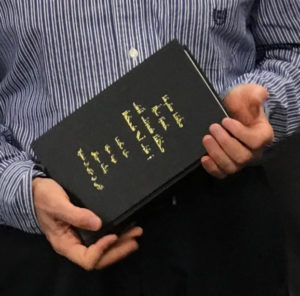 Aramaic was the heart language of many Christians in the early church. They preserved their faith and heritage by speaking Aramaic even after Islam and Arabic became dominant in the region. Today, five Aramaic dialects are still being spoken. But these languages have changed significantly over the past centuries, rendering older versions of Scripture no longer intelligible to modern speakers. Each has received an updated translation of the New Testament and are now working on Old Testament translation.

Rev. Ken Bunge has been assisting with translation since 2010. “I knew the history of the Western church but knew little about the history of Christianity in the East,” he said. “Places such as Iraq and Syria are rich in Christian history. The Church of the East, a daughter of the Church of Antioch, existed east of the Mediterranean and Israel. For roughly a thousand years these Christians spread the Gospel of Jesus Christ as far east as China! But they were—and still are—being persecuted for their faith.”

On November 30, Giving Tuesday, LBT will be raising funds to support Aramaic Bible translation efforts. As Rob Hilbert explained, “As war and unrest continues in Syria, Iraq, and other parts of the Middle East, more Aramaic Christians are being forced from their homes. Many have emigrated to the U.S. among other western countries. By providing the comfort of Scripture in their own language, we can help the Church better serve them and ease some of the trauma they have endured.”

The Aramaic people have remained firm in their belief and reliance on Jesus even in the face of murders, forced conversions, theft of possessions and displacement. And they still hunger for Scripture in their dialects. As we enter this season of thanksgiving, as we give praise for God’s provision for all people, we are especially thankful for the comfort and strength He has granted to the Aramaic community through His Word. You can help put Scripture in their hands through the modern versions of this ancient language, already a thousand years old when spoken by Christ. Mark your calendars and make a gift on Giving Tuesday!