The young woman was very ill. Her husband asked LBT missionary Rev. Tim Beckendorf if he would drive her to a nearby clinic. She’d already seen other doctors and traditional healers. Now the clinic confirmed the diagnosis. She was dying. They sent her home to be cared for by family. 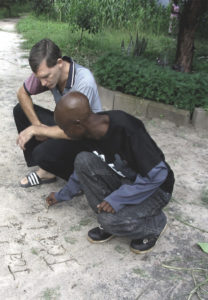 Tim was in the early days of his Bible translation ministry in Botswana, still in the process of learning the Khwedam language. He visited the woman every time he was in her village.

“I didn’t have the words in her language to speak of the hope that we have in Jesus. So, I spoke to her with the help of a man who knew a little English and Setswana and I tried to tell her in the simplest way possible about the love that God has for her because of Jesus. I told her she didn’t have to fear death because Jesus had already died and became alive again to forgive her sins and give her new life. I don’t know if the message was heard in her heart or not. I longed to tell her in the words of her language but was still a long way from being able to do so.”

Around this same time Tim learned about a missionary from another country who had visited the village, using an interpreter to speak to the people who gathered to listen to him. “I asked the people what they heard. From their response, they really heard nothing. His interpreter used a word for ‘grace‘ in their language that just means ‘good‘ or ‘ok‘. The villagers I spoke with had a long discussion about what word should be used. They said the word the missionary used was wrong but could not agree on the correct word.”

How do we speak a word of ‘grace’ to a people in desperate need when there has been no exploration of their language and culture to find that word? We need to discover those words in their heart language, words that will speak of grace, hope, forgiveness, and eternal life. The same wonderful gifts we are privileged to hear and read about in our language as we worship, as we read Scripture, as we share God’s Word in our own communities.

As Tim said, we don’t know if the dying woman understood what he was trying to tell her. But her children and generations of children to come will understand because they now have God’s Word in their language. No barrier of language or culture should prevent people from learning about the saving grace of Jesus Christ. Working together, we can put Scripture in their hands!