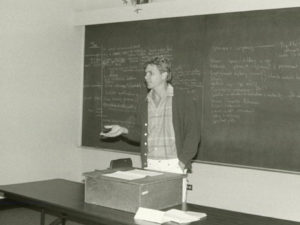 Dr. Mike Rodewald began his career in missions serving with the Bandi people in Liberia

Filtered through the jungle sound of insects whirring and birds calling came the faint but unmistakable drone of the airplane. I’d heard that sound many times before. Times that I had awaited mail. Times that I awaited supplies. Times that I’d needed a part for something that had broken down. All those times the pilots had played a vital role in the Bandi ministry here by supporting the work. However, this time I was especially glad to see the plane come. I was sick and needed to leave the village for medical treatment. Considering the rain season roads, one of LBT’s pilots had volunteered to make an extra trip and come and get me. It is hard to express adequately how thankful I was to see him coming in.

It’s really a team ministry we are all involved in. We all have a role. I’m working upcountry with the Bandi people here in Liberia because our three pilots keep me supplied and assured of emergency help. I’m here because of the mechanic, builder and business manager who fix my car, find me a suitable place to live and handle the funds transactions that that make money available so I can do my work. There are many more who play an important role in this ministry. 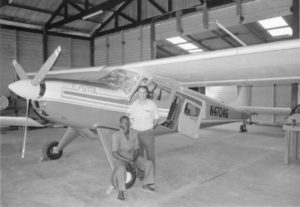 LBT’s plane service was discontinued during the Liberian Civil War

Dr. Mike Rodewald wrote the words above over 30 years ago when he was a young missionary serving in his first assignment with Lutheran Bible Translators. Much has changed since then: the Bandi have the New Testament in their language, there is a thriving literacy program in the Bandi community, and Old Testament translation is in progress. Dr. Rodewald recovered from his illness, continued service in Liberia and later Botswana, and today serves as CEO and Executive Director of LBT.

There is one important thing that hasn’t changed. Dr. Rodewald said it in 1986 and it’s still true today. Just as it was not possible for that pilot to understand how much I appreciated him as he came in for a landing, it may not be possible for you to know how much your prayer and financial support is appreciated.

It’s not just LBT staff who are grateful. People who receive God’s Word in their language through programs made possible by gifts from generous donors feel exactly the same way. They know that translation and Scripture engagement can’t happen without people like you—people who give of their own resources expressly to help them.

So here’s a heartfelt THANK YOU on behalf of all those who have benefitted from the generosity of so many donors over the years, and in anticipation of those still to come.

Learn more about the Bandi Old Testament translation and other LBT projects here.