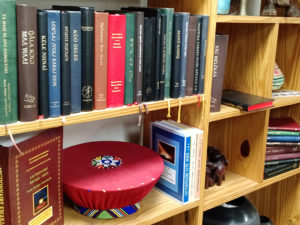 The story of Pentecost in Acts 2 is one of the key stories in support of what we do in Bible translation. A crowd from all over the ancient Mediterranean world was gathered in Jerusalem for the Feast of Pentecost (a Jewish festival known also as the Feast of Weeks, marked by anticipation, giving of harvest first fruits and traditionally celebrated as the occasion of the giving of the law). On the morning of the feast, a commotion is reported, a sound of a great rushing wind and loud voices. A crowd gathers to hear the followers of Jesus speaking—declaring the wonders of God it says in Acts 2—and each could hear it in his own tongue!

Certainly God, the Creator of all languages, knew just the way to express His message on Pentecost. The fact that He spoke so each could hear in their own tongue is significant. He wanted them to hear of His works and grasp it with their head and their hearts.

Bible translation operates in that tradition—attempting to describe the wonders of God so that each can hear of it in his own tongue. Working with partners from the indigenous churches, we wrestle with what to call God, how to describe basic articles of faith and how to most clearly express the amazing message of God’s love for us in Christ given to us in Scripture. We pray that with the work we do, each people group will experience their own day of Pentecost, when the power of the Holy Spirit will be poured out and people will hear the wonders of God in their own tongue.

On the day of Pentecost in Acts 2, all was fulfilled in Christ. The anticipation of the disciples was met by the Holy Spirit. On this day commemorating the giving of the law, YHWH gave the Gospel, speaking directly to the people through His Holy Spirit and the disciples gave thanks and praise to God and harvested the first fruits of all who would believe—3000 that very day. May we work together with Christ that His message of fulfillment be brought to all nations.