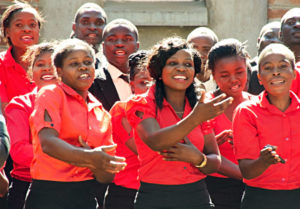 Choir at the Nsenga New Testament dedication in Zambia, July 2016.

It’s easy to think that as individuals, we are unable to make any difference in a world that is often filled with confusion, pain, and turmoil. But that’s not true. We all have an influence on the people and events around us.

Over the centuries Christianity spread because people very much like you and me wanted everyone to experience the joy of having Jesus Christ at the center of their lives. The shepherds tending their flocks were the first to proclaim the news about the newly born Christ Child to those in and around Bethlehem. The crowds who followed Jesus during His ministry shared His words and reported His miracles to friends, family, and perhaps to those they didn’t even know. The disciples traveled the known world to teach all nations that their Savior had come. Princes and paupers, educators and the non-literate, farmers, and merchants, all continued to build God’s kingdom. Did any of them—could any of them—envision the impact their words, their witness, their own faith, would have on those around them? Did they foresee a world where one in three people professes faith in Jesus Christ?

We are all part of a succession that reaches back to the very creation of mankind and God’s plan for our salvation. Our common mission was established on a long-ago night in Bethlehem. That tiny baby, seemingly so insignificant, inspired such faith and devotion that the world was literally transformed.

I hope you feel a real connection to the shepherds, the people of Bethlehem and all the believers who followed. They aren’t just characters in a story. They were living, breathing people whose legacy now rests with us. They reached out to the world and changed it, each in their own way, through the power of the Holy Spirit. Together, we continue that tradition.

Thank you for helping make a difference in so many lives. We look forward to another year of partnership, serving together to put God’s Word in the hands of those waiting for Scripture in their languages.