A missionary serving with Lutheran Bible Translators once made the observation that modern media easily makes us aware of the pain and trauma of others, especially when disasters occur. This is usually followed by an outpouring of support. “But what about their spiritual well-being?” he asked. “What about those who suffer the death of a loved one, but have no hope of the Resurrection? What about those tormented by guilt and sin, but have no understanding or hope of forgiveness and mercy? What about those misguided by false beliefs?” 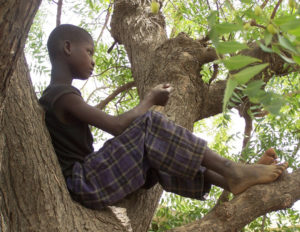 Easter is just another day for those who have no knowledge or real understanding of God’s Word.

A number of years ago I traveled with a group of individuals who were interested in mission service with Lutheran Bible Translators. Relatively new to the organization myself, I was surprised by what I learned. Though the country we visited is considered a Christian country, in many areas traditional beliefs have remained extremely influential. These traditions have oftentimes blended with those of Christianity, distorting the true meaning of God’s Word.

Why did this happen? When this area was conquered and colonized in the 16th century, many of the indigenous people “converted” to Christianity, not always by choice. Because their exposure to Scripture was through a language they did not know, they had little or no true understanding of Christian beliefs and practices. The merging of their old beliefs with elements of Christianity seemed natural and acceptable to them.

That’s a bit of a simplification of course. The point is, centuries later, we can still see where misconceptions about Christianity remain in many countries throughout the world. We who understand Scripture recognize the Resurrection as the defining event in human history that provides us with the path to redemption through the person of Jesus Christ. But for hundreds of millions, the Resurrection is either unknown or misinterpreted. Easter is just another day.

Our joint task as God’s servants is to provide people with Scripture they can use, study, and share, welcoming them into the body of Christ and together growing in faith. Thank you for putting God’s Word in the hands of people in need of clarity and truth. God bless you this Holy Week and may your Easter be filled with joy!