You’ve probably heard a version of this story.

A young woman prepared dinner for her parents, baking a large ham with all the trimmings. The woman’s mother had a question. “Why did you cut the end off of the ham?” The daughter replied, “Because that’s the way you always fixed it.” After a moment’s thought, the mother exclaimed, “I cut the end off because otherwise it wouldn’t fit in our oven!”

The daughter based her ham preparation on childhood observations of her mother’s cooking method, unaware of the true reason for her mother’s actions. Save for their conversation, it could have been the start of a family tradition perpetuated for years to come.

Like families, every culture has its own customs and traditions going back for generations. Many of these customs are positive and good. But others are motivated by fear and misunderstanding, and sometimes by belief in the power of witchcraft or other malevolent forces. 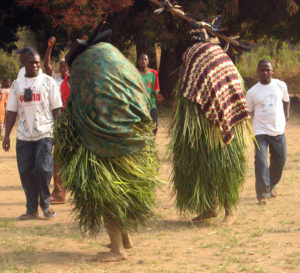 When people understand Scripture, they can identify those traditions that are not God pleasing while still retaining important parts of their culture and heritage.

In last week’s blog I told you about Martin and Joan Weber. A few years after they began their work with the Kwanja people of Cameroon, they witnessed a Kwanja ceremony. Three days and nights of dancing were led by people wearing grass costumes and masks representing the spirits of the ancestors. Afterward, several chickens were sacrificed.  The Webers were told, “We fear what might happen to us if we don’t do these things. We must keep the ancestral spirits in remembrance, so they will give us their blessings.”

Now I’m not suggesting that since then every single Kwanja person has become a committed Christian and abandoned all ancient traditions and practice. Even those of us whose Christian tradition has been ingrained for years—perhaps from birth—can easily fall into sin. But the Kwanja, and others who now have God’s Word in a language they understand, can look to Scripture to help find alternatives to rituals and traditions that are contrary to Christianity. As they question the motives behind the old traditions, they are learning to trust in the power and compassion of our Creator, the one true God. They are learning to live their lives in the light of Christ.

Christian tradition includes sharing the Word of God with those who do not know about Jesus. Because of your gifts and prayers, missionaries serving through Lutheran Bible Translators spread God’s Word around the world. And as people come to faith, they in turn serve as an example and inspiration to friends, family and their language communities.

Throwing away part of the ham is harmless, if wasteful. Following the dictates of false doctrine has consequences now and for eternity. People cannot change unless they know the truth. With your help, the truth about Jesus Christ is spreading around the world. We pray that your partnership in Bible translation is a tradition you choose to continue and pass on to future generations!