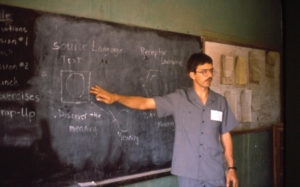 My grandparents preferred to speak their native German language while in their home and I’m quite sure my mom’s first words were in German. As she got older and began attending school, she quickly learned English and spoke it impeccably.

But every now and again she would still use a German word to describe something. When I’d ask for an English equivalent, she’d say, “Well, it’s kind of like this, but not exactly. There really isn’t a good word for it in English.”

She didn’t know it, but she was describing a challenge encountered by every Bible translator. Sometimes there just isn’t a word or idiom that exactly corresponds to an object or concept found in Scripture. Describing something as ‘white as snow’ may resonate with those who have seen snow but means nothing to those who haven’t. Meeting ‘face to face’—as Paul desires to do in Thessalonians—implies in some cultures that Paul is spoiling for a fight! And how do you describe a multi-level enclosed vessel like the ark to people who have never seen anything but dug-out canoes and small motor boats?

Jim Kaiser, now serving in Ethiopia, was advisor to the Kono New Testament translation team in Sierra Leone. He is well aware that finding the best way to preserve the meaning of Scripture can be a lengthy process. As he recalled, “For many Biblical words there is no one Kono word that has the same meaning. We first used the word ‘chinjin’ for ‘forgive’.  But we found that ‘chinjin’ only meant to be sorry for or have pity on.”

Further study revealed a Kono phrase that more accurately communicated the essence of forgiveness. Jim explained, “To the Konos, if you are interested in something, you will ‘keep your hand in it’. Once you take your hand out, it means the matter is no longer of concern to you. So when you forgive someone, you ‘take your hand out’ and no longer hold a grudge.”

Clarity of meaning is everything in Bible translation. That’s why it’s such a painstaking process. Faith cannot grow if we ‘kind of but not exactly’ understand our relationship to God through Jesus Christ. As a Dan speaker in Liberia said, “My spiritual life changed when I read the New Testament in my language. I then understood that it is only through faith in Jesus that our sins are forgiven.”

No matter the language—no matter where in the world—when we find the right words, the Word impacts lives.