“A Mighty Fortress”-500 Years of Comfort and Inspiration 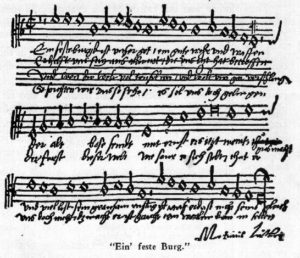 The organ thunders the beginning chords. The congregation takes a few deep breaths in anticipation. Together they sing what has become one of the most well-known hymns in the world. No Reformation service would be complete without it.

“A Mighty Fortress is Our God” is often referred to as the battle hymn of the Reformation. Though it certainly served to strengthen adherents of the new Lutheran church, scholars disagree about Luther’s actual intent when he wrote it. It is known that during that period—around 1529—Luther was experiencing multiple difficulties. Aside from the stresses and dangers brought about by his stand against the Catholic Church there was controversy among Luther’s fellow reformers. He was also experiencing ill health and personal loss. It has been suggested that he turned to Psalm 46—the Scriptural source of this celebrated hymn—for comfort. And the powerful message he found there became a source of strength he shared through musical expression.

Music was always part of Luther’s life. As a young student he sang in the choir and learned to play several instruments. As the Reformation unfolded, Luther used music as one means to teach God’s Word to lay people, basing most of his works on passages from Scripture. At that time, singing during worship was in Latin and most often by monastic choirs. Luther restored congregational singing using hymns written in or translated into the German language.

Today music remains an integral part of worship. And using familiar tunes and rhythms is still an effective way to make Scripture accessible to people in a language they understand best. As Luther said, “Both text and music, accentuation, melody and gait, must come from the true mother tongue and voice.” Assisting people to compose worship music in their unique style and language is very much a part of LBT’s Scripture engagement strategy, and another example of Luther’s legacy to Bible translation.

“A Mighty Fortress” is certainly a song of praise and victory. And that is why it is also a hymn of comfort. The lyrics assure us that no matter the challenges, God always prevails. Luther took heart knowing that nothing—neither human agency nor Satan himself—can alter the promise of eternal life given through faith in Christ.