A Literal Truth About LBT

When we at LBT give the short explanation of what we do, it generally boils down to three things: Bible translation, literacy, and Scripture engagement.

Seems pretty straight forward.  God’s Word is translated into languages that have no Scripture and a manuscript is printed, people learn to read, and people are encouraged to actively engage with God’s Word using a variety of culturally appropriate materials, including audio recordings of Scripture. 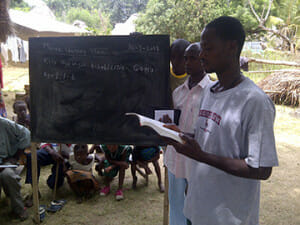 It’s true that literacy has always been a major component of LBT’s mission.  An early LBT publication stated it this way: LBT was founded in 1964 to help bring the written Word of God to people whose languages are yet to be written down.  It goes on to say if people are to become effective witnesses for Christ, they must have the written Word of Christ in their own language.  Further on it states a Bible translation is of little use unless the people are able to read it.

Don’t be misled by the emphasis on literacy.  It has long been recognized that not everyone will learn to read, but during LBT’s early years, there were few alternatives.  The cassette tape player was not widely available.  Producing cassette recordings for mass distribution just wasn’t feasible.  Yet this technology did make a contribution in a small way.  Listening groups were already being utilized to bring God’s Word to people in local areas.  Instead of a live reader, a cassette recording, produced by a missionary with a player and microphone, could be employed.

Even as technology progressed – the CD, the DVD, the MP3 – the logistics and costs of recording Scripture were prohibitive.  To transport heavy equipment to remote areas that had unreliable power was counterproductive.  And what is the point of creating a recording if people don’t have the equipment to listen to it?

The past decade of technological development has coincided with the increasing understanding of the value of and need for audio Scripture.  Smaller, portable, and more efficient equipment can produce quality recordings that can be played on a variety of devices that range from solar powered machines to cell phones.  And greater access to such devices in many developing nations means more people can be reached.

Our main goal, as stated in that long ago publication, remains the same.  We make God’s Word accessible to people so that the Holy Spirit can work change in their lives.  How do we do it?  By employing the methods and technologies that are the most appropriate, useful, and meaningful for the people we serve.

So does LBT still promote literacy?  Undeniably.  Literacy is now recognized as part of Scripture engagement, just one of many ways to equip and encourage people to study the Word of God.  In fact, many people are inspired to learn to read because they heard audio Scripture.  What wonderful symmetry!