The President Wants to See You

Missionary Alvina Federwitz (known locally as Ma Wata) was preparing to return to the U.S. after serving 42 years in Liberia and other parts of West Africa. In the midst of packing she received a phone call. Dr. McClain, protocol officer for Ellen Johnson Sirleaf, Liberia’s president, informed her, “The president wants to see you before you leave Liberia.”

Alvina saw an opportunity. “I wanted to make a statement that mother tongue education would not end when I leave Liberia,” said Alvina. She asked for and received permission to bring David Setiyee, executive director of LBT’s partner LIBTRALO (Liberian Translation and Literacy Organization), Jim Laesch, LBT’s associate director of international programs, and professional colleague and friend Ma Hawah Goll-Kotchi, along. She wanted to introduce them to the president so that the efforts of LIBTRALO and those colleagues passionate about God’s Word through Liberia’s languages can continue with the blessing of the president even after Alvina leaves. 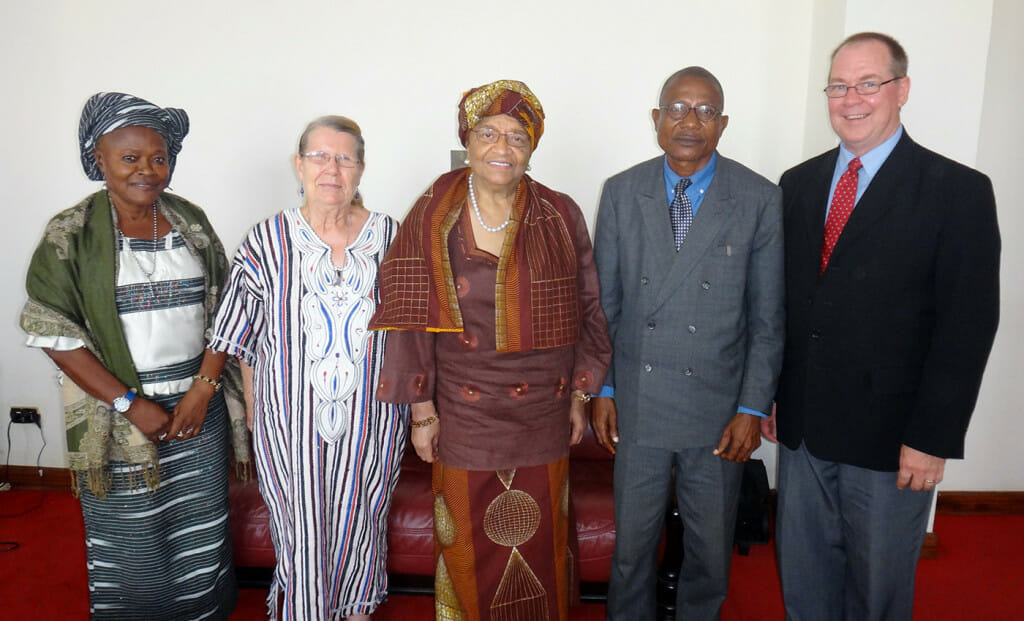 Alvina’s life clearly demonstrates her heart to see Liberians be fully literate in both mother tongue languages and English so they can read and understand God’s Word directly through Scripture. In her years of service through LBT, she not only worked tirelessly towards that goal but raised a family of four children, struggled through civil wars and political instability, and lost her husband, Dale, to cancer. Serving in Liberia was not always easy, but in the process she gained many friends that have become as dear to her as family.

Alvina’s colleague, Ma Hawah, was excited to be included in the audience with President Johnson Sirleaf. “It will give us an opportunity to show her the cellphone SD cards that LIBTRALO has available for Liberians to hear Scripture as well as traditional stories that teach cultural values that relate to Scriptural morals,” she said before the visit.

While at the executive mansion, Alvina presented President Johnson Sirleaf with a collection of Gola traditional stories and the Vai New Testament in audio form. She also shared highlights from her 42 years of mission work in Liberia. President Johnson Sirleaf listened carefully to Alvina’s comments and encouraged the executive director of LIBTRALO to keep working closely with Liberia’s Ministry of Education.

This was not the first time Alvina met with the president. In 2007, both LIBTRALO and Alvina were honored by President Johnson Sirleaf for their accomplishments in promoting Liberia’s mother tongues and multilingual education. Alvina was also conferred Liberia’s Dame Grand Commander of the Humane Order of African Redemption.

At the end of the visit, President Johnson Sirleaf reiterated her appreciation, warmly saying, “Thank you Ma Wata for your service to the people of Liberia for such a long period of time. May God bless you as you leave us and return to the United States. The nation of Liberia is thankful for all your contributions.”

There are 31 languages spoken in this West African country. LBT and LIBTRALO serve mother tongue translation, literacy and oral Scripture distribution efforts in 14 of those languages.

Alvina ‘Ma Wata’ Federwitz will continue serving through Lutheran Bible Translators by connecting with those passionate about serving the vision of God’s Word for every language through prayer and gifting. In this way the work in Liberia shall continue even as she is no longer present. To find out more how to support the vision of Lutheran Bible Translators in Liberia or other parts of the world where LBT missionaries are serving, visit lbt.org.