Ready for the Road 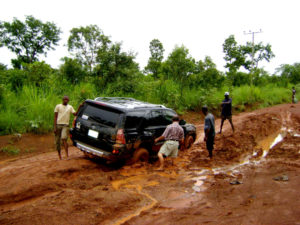 A rope and a hoe can help deal with mud.

If you’ve taken a road trip in the past, or are currently planning one, you know there are some essentials you need to take along. But did you ever wonder what missionaries include among the most important items to have while traveling on the mission field?

It’s no surprise that water and toilet paper top the list. Alvina Federwitz, who served in Liberia, explained, “There are no bathrooms available after you leave the capitol city. We would look for a trail that goes into the bush that was the most likely not to have snakes. Then hope no one else used the trail to get to the main road and interrupted our privacy!”

Another popular item is the plastic mixing bowl. Trips can take hours over roads that are often rough. Hours of bouncing around in a vehicle that may be hot and uncomfortable. Need I say more? 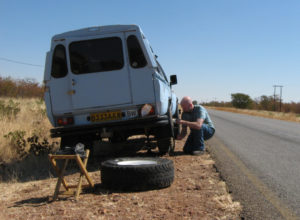 A stool can double as a chair or a table.

Strong rope can serve dual purposes. It’s a good idea to tie things down so they aren’t jostled around or broken while driving over the aforementioned rough roads. Or, as Alvina relates, fly out the open window, like the container of chocolate chip cookies that bounced off the backseat when her husband’s car hit a large bump. Of course, as every missionary knows, an equally useful function of rope is to pull cars out of mud.

Many missionaries carry Christian tracts along with them. These are especially useful as handouts to police at checkpoints, custom agents and others met along the way.

Several countries require that a fire extinguisher be carried in vehicles. Though not required, spare shock absorbers, two spare tires, and extra gas all come in handy. When Nathan Esala served in Ghana, he included a small hand-held vacuum on his list of essentials. “Not to clean out the car,” he explained, “but used in reverse to pump air back into the tires after a puncture.” 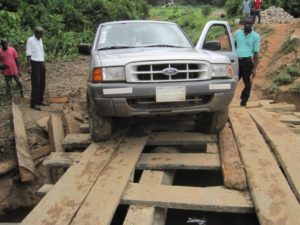 Look out for nails in wooden bridges.

Chuck Tessaro in Nigeria discovered another way to pump tires. “There was a time when we chose not to repair our car air conditioning system due to the expense. So we disconnected the system, but left the compressor in the car. We had a long hose we could attach to the compressor, which was great for pumping up tires.”

Rob and Eshinee Veith discovered there is often a lack of seating at public events in Botswana. They would carry a folding chair or stool in the trunk of their vehicle. “The stool came in handy as a small table for putting tools on when we got a flat tire on the edge of the Kalahari Desert,” they remember.

You might find somewhat more unusual items in a missionary vehicle. A cutlass or machete is used to cut up fallen trees and branches that are blocking the road. A large hoe is useful to dig out a car stuck in a mud hole. (Especially in conjunction with a rope).

For those of you concerned about the infrastructure here in the U.S., I offer one last essential missionary item. Martin and Joan Weber have served in Cameroon for almost 40 years. Joan reports that they always carry a small sledgehammer. “Smaller bridges are surfaced with planks. The nails holding them down sometimes come up and can cause flats. So I pound them down and then cross.”

May all your travels be safe and uneventful. Click here to learn more about missionaries serving with Lutheran Bible Translators.