God’s Word for the Khwe in Botswana 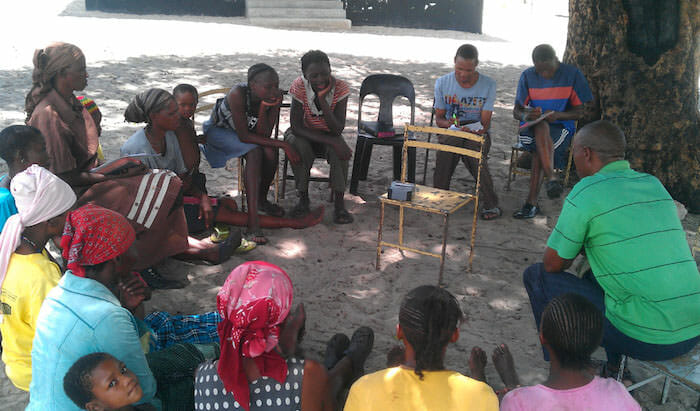 We printed booklets of Scripture late last year for our work in Botswana. Since many people cannot read, we also purchased AudiBible units so people can listen to the Bible in Khwedam. The response to both has been great. In fact, there is a higher demand for the players than the books.

Our friend Eben works with the San people in Botswana and Namibia. About once a week, Eben visits a nearby village to lead a Bible study. Normally 10 to 15 people attend the study. One day when he took our booklets on Genesis along with one AudiBible, more than 20 people came. Eben set the AudiBible in the middle of the group and started with Genesis 1. All listened in rapt attention, and some even followed along in the booklet. Over the next three hours, the group listened to Scripture over and over again and asked many questions, and still they only got through the first chapter of Genesis. Eben was overwhelmed with their response. Someone asked, “Why, if the Bible teaches that God created the universe, do our children learn otherwise in school?” The theory of evolution has taken hold and eclipsed the Biblical account in Botswana as well as in the West. It was a great opportunity to engage the people with the truth of the creation of the universe.

Later, one guy from that village hiked 14 miles to our house to ask if they could have another AudiBible. We happily granted the request. The AudiBible units and booklets have also been distributed to the Khwe communities in South Africa, Namibia, and even Angola! This is significant, because we’ve been unable to access the Khwe in Angola because of visa issues, land mine issues, and other logistical challenges. However, a young man visiting Namibia was returning to Angola and took one of the AudiBibles with him. Wow!

We give thanks that God’s word is going forth. People are responding to Godʼs Word in Khwedam. Would you pray with us? Pray that we will have more of the Bible available for the Khwe soon.

Pray that people would continue to engage with the portions of the Bible that are available.

This blog post was adapted from Rev. Tim and Lisa Beckendorf’s newsletter. To learn more about their ministry, click HERE.