When Rev. Rich Rudowske served with Lutheran Bible Translators in Botswana, his home was robbed. The thief, Mothofela, was a 16-year-old orphan who lived alone in a small room near estranged relatives. He was arrested and booked. Rich filed charges.

The following day, Mothofela, his grandmother and his aunt appeared at the Rudowskes’ home. Although Mothofela had also stolen from them, the aunt and grandmother did not file charges. They asked Rich to consider dropping charges as well, explaining that if Mothofela was convicted, he would lose funding to continue school and would have very few options after serving his sentence.

After much discussion and prayer, Rich dropped the charges. Then he spoke with Mothofela. “I explained that I had forgiven him not because I was a good man. Quite the opposite, that I am a great sinner who has been forgiven everything by my Lord and Savior Jesus Christ. I was just passing on to him that which I have freely been given in Christ Jesus.” Rich then gave Mothofela a Bible with some verses to read over. 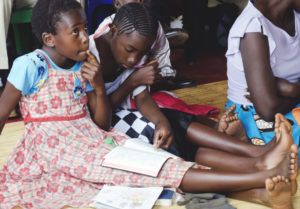 Sharing God’s Word truly can bring about change, now and for generations to come.

It was two years before Rich saw Mothofela again. “He told me he had earned the opportunity to attend a top school in Botswana.  And he was involved in a local church, sharing the message of forgiveness that Christ won for us and freely gives to us.”

We cannot know how our faith and actions will be used by God to touch other people and change their lives. When Christ entered Jerusalem to the adulation of the crowd just days before His death the expectation was that He would deliver the nation from occupation by Rome, corrupt leadership, poverty, and oppression. What He actually won for them was a gift of far greater value. And when those first witnesses to the Resurrection understood what He had done, they shared His message of forgiveness and salvation that would ultimately impact lives throughout every people and nation.

God is using all of us to reach out to the Mothofelas of this world. Through your partnership in Bible translation, you put Bibles in the hands of those waiting for Scripture in their languages. You share the love of Christ through your prayers for the language communities served by Lutheran Bible Translators. As we approach Holy Week, may you be blessed—and be a blessing—through the promise and hope found in Jesus.