Does the Reformation Continue?

In a previous post I mentioned Ulfilas, who translated Scripture into Gothic in the 4th century. Only portions of Ulfilas’ translation still exist but an abundance of materials written by and about the early church reformers—Wycliffe, Hus, Calvin and Luther—are available to us today. A confluence of political, social, and cultural events—along with the invention of the printing press—allowed for a rapid spread of new ideas to a European audience receptive to fresh perspectives. In Luther’s case, the 95 Theses were reprinted multiple times by various people, making them know throughout Germany within a matter of weeks. Two months later, the document was available throughout Europe. 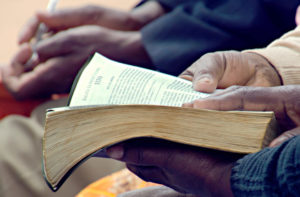 Luther’s attempt to begin a dialogue regarding corruption in the church led to a movement that changed how we view our relationship with God, influenced the balance of political power, changed the map of Europe, and inspired and shaped the formation of the New World. Yet Luther clearly stated that “I simply taught, preached and wrote God’s Word; otherwise, I did nothing.”

For Luther, the Word of God was the only source of religious authority. And he wanted individuals to study Scripture for themselves to gain an understanding of God. His prayer was that “this one book alone, in all languages, would live in the hands, eyes, ears, and hearts of all people.” But that vision has yet to be realized. Millions of people today are not able to engage with Scripture because they do not have it in a language they understand. Their reformation—a new and certain knowledge of a loving and gracious God in place of false gods and spiritual insecurity—has yet to occur. The spirit of the Reformation continues as individuals and communities come to an understanding of God through translated Scripture.

Next year will mark the 500th anniversary of Luther’s New Testament translation into German. His translation techniques and practices continue to influence Bible translators today: referring to original Greek and Hebrew manuscripts, using natural speech so that people will easily understand Scripture in their languages, consulting with others, promoting literacy. Thank you for your prayers and support. Together we are helping fulfill Luther’s vision as people receive Scripture in their languages for the first time.