Music and Lyrics by… 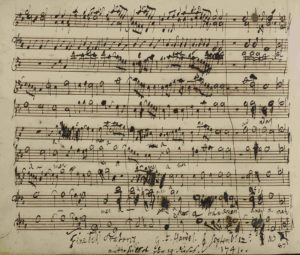 Did you know that it took Handel only 24 days to compose the 259-page, quarter million note score of the Messiah? The text of the Messiah—compiled by Charles Jennens—was based on the story of the life of Jesus as found in the King James Bible. This beautiful and moving oratorio was made possible only because Handel and Jennens had translated Scripture available to them—a translation that took over seven years and 47 prominent scholars to produce. The passion and fervor that each brought to the composition was based on a Christian faith that both possessed from childhood.

Written in English, the Messiah has been translated into numerous languages. The music itself is wonderful. But it’s the words that convey God’s plan for the redemption of humankind.

God’s Word cannot move hearts unless it is available in a language people can understand. The preface to the King James Bible says, “Translation it is that openeth the window, to let in the light that breaketh the shell, that we may eat the kernel; that putteth aside the curtain, that we may look into the most holy place.” Four hundred years after those words were first printed, the window still remains closed to hundreds of language communities around the world.

We just celebrated the Resurrection of our Lord, singing hymns of praise and maybe even parts of the Messiah. But millions of people still have no knowledge of Jesus Christ and the miraculous events of that first Easter morning. Who knows what glorious songs of praise may be composed—in a variety of languages—in coming years as more people learn about Jesus through translated Scripture?

You can put God’s Word in their hands! Learn about language projects and needs at lbt.org/give. Please pray that all people may come to know they have a Redeemer, and that He lives for them today!