Not a sentence you usually hear in the pastor’s comments on Easter Sunday. But this pastor was speaking to his congregation in Cameroon, where people believed that some of the dead did come back as ghosts and appear to the living. They were very afraid of these ghosts who could curse and harm them. 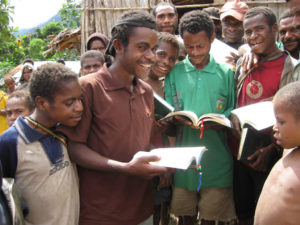 The pastor went on to explain why Jesus could not have been a ghost. And he did it by citing text from Scripture that had been translated into the local language. The doubts and fears his people had regarding the dead were not unique to that time and place. Ancient peoples held many beliefs about the afterlife. The disciples may not have believed in what we today call ghosts, but they were aware of Jewish tradition that suggested the soul may linger for three or more days after death. No wonder they were confused when Jesus appeared among them!

God knows our concerns and fears. Throughout time, in every place, He knows all the questions, doubts, and temptations that affect us. Scripture addresses it all. The same words and actions that reassured the disciples can speak to people in Cameroon and every other place where traditional beliefs predominate.

“Jesus invited the disciples to touch Him,” explained the pastor. “You can’t touch a ghost. Ghosts cannot eat, but Jesus asked for food and ate. Jesus was physically there; He was not transparent but had a body. If a ghost looks at someone that person will get sick and die. Jesus looked at the disciples. They did not die. Ghosts come to do harm. Jesus came to take away fear and assure people of His peace.”

God’s Word that speaks to our hearts and directs our paths changes lives when translated Scripture becomes accessible to those who do not know Jesus. Thank you for sharing God’s love and peace with people around the world!