Experiences of a Lifetime

Is it really worth the time and effort to translate the Bible?

If you ask Jim Laesch, the answer is an emphatic YES! “I’m sure glad that someone else took the time and effort and devoted their life to translate the Bible from Greek and Hebrew to Latin and German and Spanish and English and so on,” he said. “It’s a great blessing to us that we have it in our language. Why would we not want to help pass along this great treasure to others in their language?” 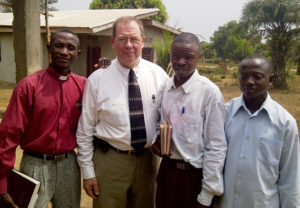 Jim spent 48 years doing just that: serving as a translator in Liberia and then in various roles with LBT’s Program Ministries department. There’s not a missionary or staff member who hasn’t benefited from his knowledge and advice. And the relationships he formed with people in partner organizations overseas have been instrumental in promoting translation and literacy projects among language communities that had no access to Scripture.

Obviously, Jim is a fervent supporter of Bible translation. “We could teach everyone English and use English Bibles, but what does that say about the nature of Christianity? It suggests that Christianity belongs to English speakers. But the nature of the Gospel message is that God made a way of salvation and forgiveness to reconcile all people to Himself through Jesus Christ. The same way Christ left His kingdom to come to earth, we can also take that message to others. The spirit of God is already working in peoples’ hearts. It only makes sense for the Word of God to also be present in these languages.”

Over the years, Jim has worked with countless people in multiple countries around the world. “We must walk alongside our partners,” said Jim, “responding to the needs and requests of these brothers and sisters in Christ.” His respect for culture and language has always been paramount, often leading to relationships that went beyond mere partnership. “Some of the strongest bonds of friendship I have were formed in Liberia,” he said.

Jim is retiring from LBT next month. He leaves an organization that is thankful for his gifts, talents, compassion and dedication that were so influential to LBT’s growth and development. He leaves confident that LBT will continue to be guided by those equally committed to putting God’s Word in the hands of people still in need of Scripture in their languages.

“It’s part of Christian mission to generously, vigorously, and strategically share the Word of God so that people are able to read and hear the good news about Jesus Christ,” Jim stated. Thank you for being part of LBT’s mission through your prayers and support. If you’d like to learn more about Jim and his role during LBT’s early years click here to find LBT’s podcast episode, Experiences of a Lifetime. And be sure to visit our Programs page for information about the many projects Jim helped develop and nurture.