Mr. Kamara is an enthusiastic member of the translation team – one of three translators. We pray that a quick recovery will strengthen the ongoing Old Testament translation work of the Bible Society of Sierra Leone.

We’re doing a series of posts that highlight people from four of our partner organizations that minister in the countries hardest hit by ebola. LBT has 87 national colleagues working in over 25 languages in Liberia and Sierra Leone. Their lives and ministries have been imperilled by Ebola and it’s effect on their nations. LBT’s Ebola Crisis Assistance campaign aims to help these brothers and sisters, both to remain safe and to press on in our joint efforts. Sign up here for future ebola updates.

Two weeks ago, a translator with LBT’s Themne Bible Translation partnership project was hit by a car while driving his motorcycle. Mr. Joseph Kamara (middle in the photo below) sustained serious injuries and is being treated at a public hospital in Makeni, Sierra Leone. Praise God he survived! Sierra Leone’s medical system was struggling before the recent Ebola crisis, but now many of the facilities that existed have been closed. We are very grateful that he was able to receive x-rays and evaluation by medical staff. 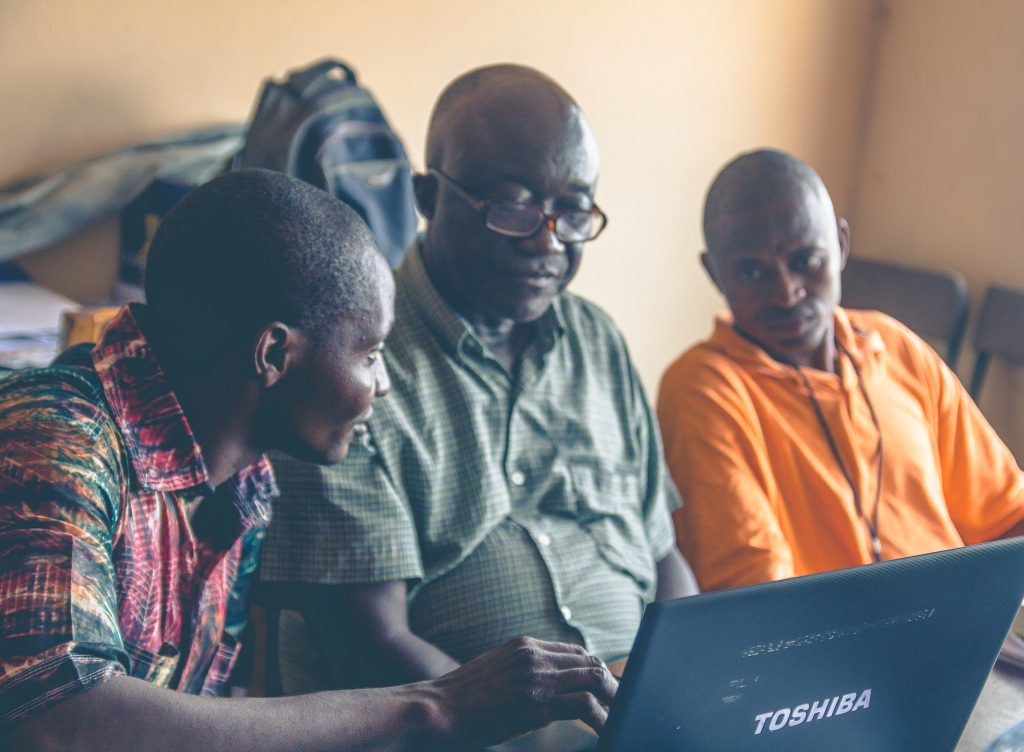 At Risk
Unfortunately, the government hospital where Mr. Kamara is receiving treatment is also one of the primary locations in the entire district for isolation of suspected Ebola cases. Although the dedicated Ebola unit is cordoned off from the rest of the hospital, the convergence of suspected cases into this one geographic location puts non-Ebola patients and staff at greater risk. While we appreciate the increase in treatment and isolation units, we also pray for the safety of his family and other translation team members who are visiting and caring for him.

Recovery
Initially, because of the pain, Mr. Kamara was not able to speak much, but he is making measured recovery. His obvious injuries are damage to his hand and his jaw. We are thankful that recently he was able to sit up for the first time.

Needs
His wife was forced to borrow half the money for his initial treatment. His needs are for quality medical care, support for his family, replacement of his motorbike (necessary for safe transportation), and eventually rehabilitative care.

About
Mr. Kamara is an enthusiastic member of the translation team – one of three translators. We pray that a quick recovery will strengthen the ongoing Old Testament translation work of the Bible Society of Sierra Leone. He is also a lecturer at the Northern Polytechnic where the Themne translation work is officed. The team is pressing on with translation of the Old Testament into Themne. Twenty-four books have been sent out and reviewed by Themne speakers in nearby communities. This project is being advised by LBT missionaries Josh and Ruthie Wagner, recently evacuated from their home in Makeni due to Ebola.

“Almighty God, We pray the number of Ebola cases in Sierra Leone will DECREASE and END. May Your Love heal every one who is sick; restore them to full health. By your power according to your Gracious will, Amen.”

Would you join us in prayer and financial support for Mr. Kamara, his family, and the other Themne translators?

Give online or mail to LBT, designated “Ebola Crisis Assistance”