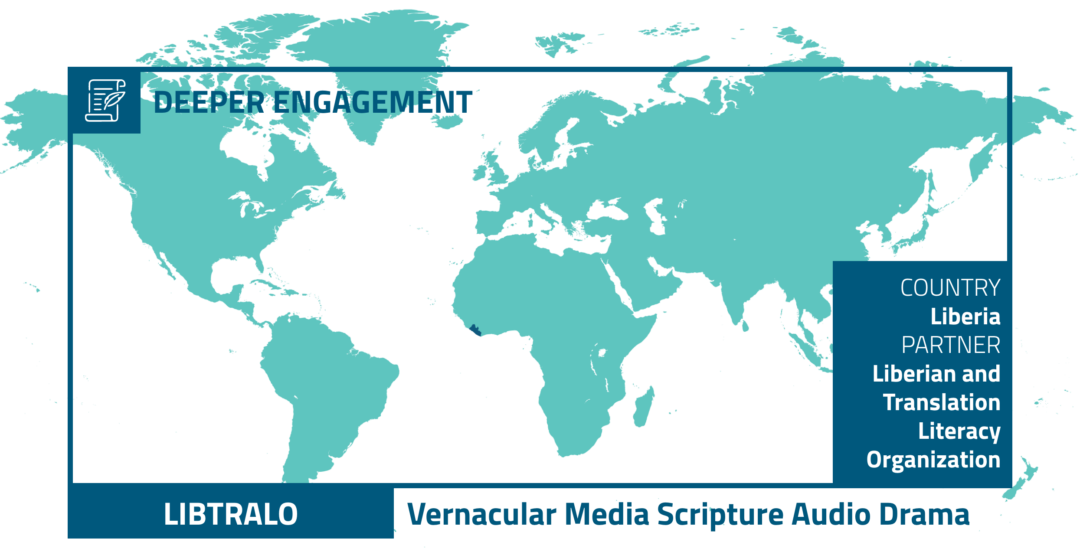 The Liberia Bible Translation and Literacy Organization (LIBTRALO) actively promotes the use of translated Scripture, currently focusing on the development of Scripture audio dramas in five languages. These recordings will reach both the literate and those who cannot read, as well as those who have issues with their vision.

Supervisors in each language group work with LIBTRALO’s media coordinator to develop Scripture based scripts, recruit participants to serve as voice actors, record, edit, then distribute the dramas on CDs and SD cards. The recordings are available to churches, individuals and radio stations, reaching a wide audience of people in all stages of life.

Audio dramas do more than motivate Christians to further study the New Testament in their languages. They also introduce non-Christians to Biblical stories and principles, raising interest in learning more about Jesus Christ and His relationship to all people.

Create a program that will be self-sustained within the language communities through volunteerism and fund-raising.

Increasing numbers of people use the New Testament in their language.

Scripture reaches and empowers those who have limited access to God’s Word.

Pray that planning and execution of the audio dramas will be easily accomplished.

Pray that all people in the five language communities, regardless of circumstances or faith, will be inspired by hearing Scripture in their own languages.

Pray that those who listen to the recordings will be moved to study the New Testament on a regular basis.

Bible translation costs vary based on the project. Operating expenses can vary in different parts of the world and for different portions of Scripture. Put God’s Word in their hands!

AVERAGE COST FOR TRANSLATION
$35 translates a verse of Scripture
$1,000 translates an average chapter

Want to get involved?
Contact a recruiter and see
what options are available!