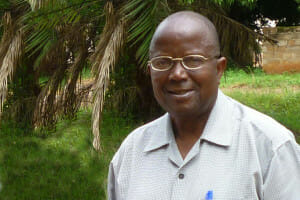 Father Tembo began his career as a librarian. After receiving a diploma in Librarianship from University of Makerere in Uganda, he worked for the Zambia library service for 13 years, eventually becoming Chief Librarian. In 1978 he earned a diploma in Development Administration from the University of Birmingham. He then served as a Public Administrator in various roles, including the Executive Secretary of Petauke District. In 1992 he left public service to attend St John’s Anglican Seminary in Kitwe, Zambia, and was ordained as an Anglican Priest in 1995. Father Tembo retired from the priesthood in 2010, but was called back from retirement by his bishop to serve as Dean of St Luke’s Cathedral in Msoro, Zambia. In 2012 he retired again, but immediately resumed full-time work as a mother-tongue translator for the Nsenga Bible Translation Project.

Father Tembo has four children and eight grandchildren. About the Nsenga Bible Translation Project, he says, “I am personally happy with this project, because for a long time I have been dreaming about a Bible in Nsenga. Now our dreams are coming to fruition.”