Why Translate the Bible?

Fewer than 700 of the more than 7,000 languages in the world have translations of the complete Bible. Fewer than 1,600 have a translated New Testament.

That means about 180 million people today do not have any Scripture available in their language. Most of these people belong to minority languages, and many struggle to maintain their identity in the shadow of majority culture. Often they have no written language of their own.

Bible translation involves bridging language and culture to communicate God’s Word clearly and effectively. Martin Luther’s early translation, completed in 1534, shaped the Western world. By putting God’s Word in the common language, Luther put it into the hands of the common people rather than just priests and bishops.

This German Bible (this is not praise for myself but the work praises itself) is so good and precious that it’s better than all other versions, Greek and Latin, and one can find more in it than in all commentaries, for we are removing impediments and difficulties so that other people may read it without hindrance.
Martin Luther 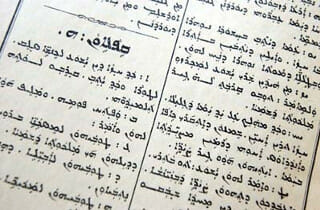 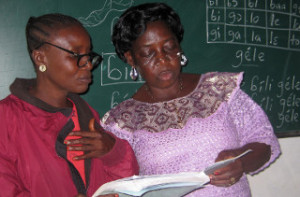 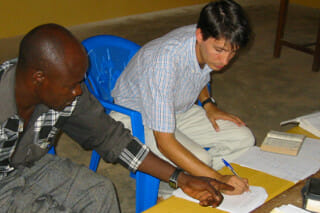 Many of the world’s minority languages are oral, meaning they do not have a native system for writing. Because language is core to community and individual identity, a writing system must be created in close partnership with language speakers. Those who feel pride and ownership in how their language is written will be more likely choose to learn to read and write.

Scripts are chosen based on the dominant script being used in the area. While many languages use the Roman alphabet, languages in the Middle East are more likely to use the Arabic script, for example.

2. Training local teachers so everyone can learn to read and write the language

Literacy is vital. If people cannot read and write, it will not matter if they have a top-notch Bible translation in their language! Early in the translation efforts, local teachers are trained to teach the community to read in write.

3. Wrestling with the Biblical text to understand its meaning

How do translation teams bridge the gap between the ancient communicators and modern communicators? Teams must factor in linguistic, ideological, cultural, communicative, organizational, ethical and theological considerations. Each decision carries nuanced consequences.

4. Creating a first draft of the Bible translation

This is, by far, the longest and most involved part of the Bible translation process.

The first draft is created in sections and entails:

a. Assuring word choices are familiar and natural to speakers of the local language

The team reviews and checks the translation piece by piece with other native language speakers for meaning, nuance, and comprehension. Every effort is made to assure word choices are familiar and natural to speakers of the local language.

In a single translation project, at least three cultures are in play. For example, the Komba translation project in Ghana must balance the traditional Komba culture, the new influences of modern Western-influenced culture, and the Ancient Near Eastern culture of the Biblical source document.

b. Confirming the draft is faithful to the Greek and Hebrew texts of the original Biblical books

When possible, words chosen to convey biblical terms and concepts are chosen from words and concepts which already exist in the recipient language. Sometimes it works best to domesticate the text, modifying the concept so the local audience can understand. (Here’s one example.)

On rare occasions, a translation team may foreignize the text and explain concepts and nuances in word usage at greater length in supporting materials—footnotes, the Bible glossary, and Scripture engagement materials.

5. Keyboarding the translation into a workable printed format

Though technology is changing the process, and each translation team works differently, early drafts are commonly written by hand. When translators work separately on different Bible portions in a single language, drafts need to be compiled into one document.

As with any book, style and formatting choices are important elements of preparation for publishing. They affect how easy or difficult the book is to read. 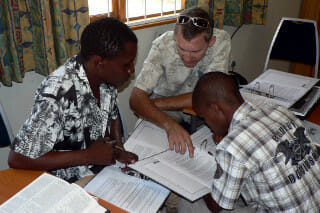 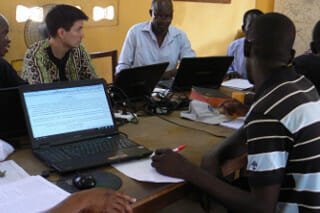 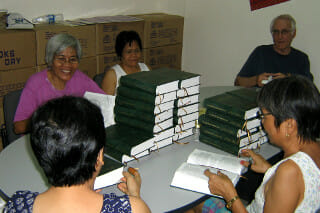 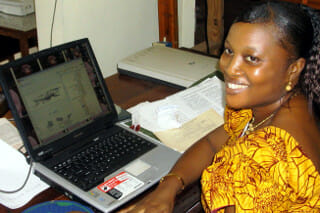 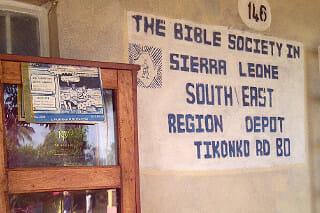 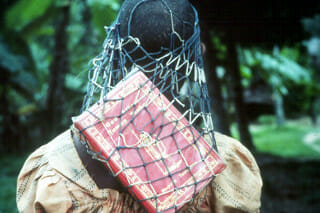 Translations must be checked again for consistency of different elements, including:

a) Comprehension. Translators check with native speakers in the village to be sure they hear and effectively comprehend the text.

c) Linguistic accuracy. Translators check again with native speakers by checking reverse translation, called back translation. Native speakers translate the completed text back into a trade language or into English, so it can be analyzed for accuracy of thought and expression.

Partnership is integral to the success of Bible translation. In most countries where we work, LBT partners with the United Bible Societies (UBS), the world’s biggest translator, publisher, and distributor of the Bible. UBS comprises 146 Bible societies operating in more than 200 countries and territories. Bible societies work with all Christian churches and many international non-governmental organizations. Their approval is essential to the success of our translation projects.

9. Delivering the approved manuscript to be typeset

This process is managed by the publisher, and involves preparing the written page for printing, choosing fonts, and more.

11. Sending the final, approved manuscript to the printers 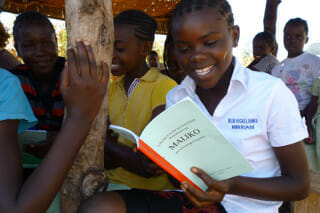 Reading the Gospel of Mark

Completing a Bible translation is a big deal! We celebrate each completed translation with a dedication ceremony, which often includes speeches, music, and local dance. Printed Bibles are made available for sale, so people can have their own copies.

Translation, start to finish for the entire Bible, may take as few as eight years, and sometimes more than 25.

Once Bible translation is complete, greater efforts are focused on Scripture engagement and literacy.

Lutheran Bible Translators appreciate any and all Bible translation donations. Should you wish to know more about the various options and opportunities for missionaries, please get in touch with us today!